Bitcoin Black Thursday One Year Later: What Happened and What’s Next

One year has passed since the infamous Black Thursday market crash cut the price of Bitcoin nearly in half. How did it happen, and what’s changed since then?

Exactly one year ago, as the world first began to come to grips with an increasingly deadly pandemic and global markets panicked, Bitcoin underwent one of its biggest crashes in its short history. The price of Bitcoin was nearly slashed in half within a matter of hours, falling as low as $4,600, in what became known as the Black Thursday market crash.

The drop was, at the time, the biggest percentual price loss for Bitcoin since it first launched in 2009, and it led to serious questions about the perceived value of the cryptocurrency as a “safe haven asset,” purportedly “uncorrelated” to other assets.

What a difference a year makes. 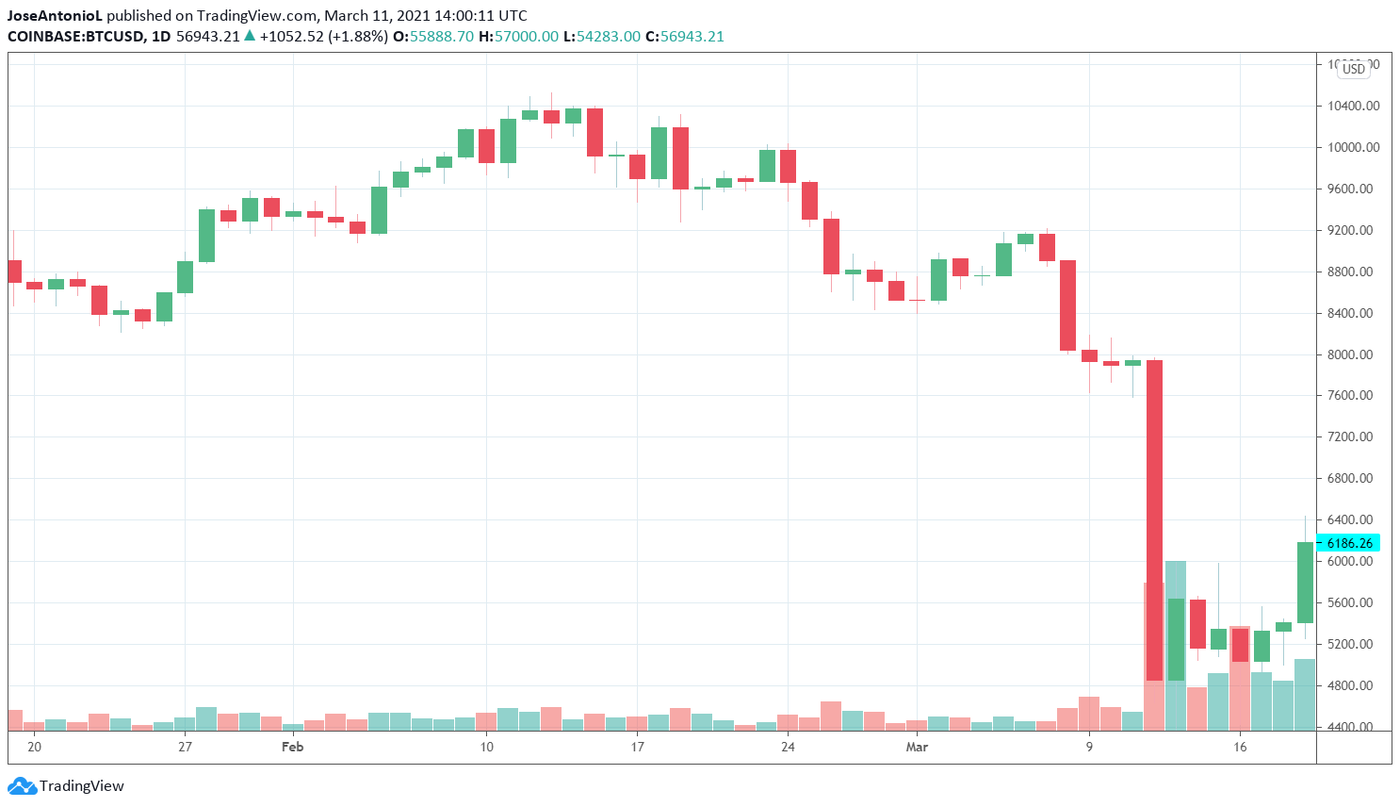 The price of Bitcoin during the black thursday. Image: TradingView

Since the mid-March crash of 2020, Bitcoin has taken off like a rocket, smashing every conceivable record in its path and currently poised to break a new all-time high as the price approaches $60,000 per coin.

In fact, when we zoom out, that epic Black Thursday crash doesn’t quite seem so epic any more. 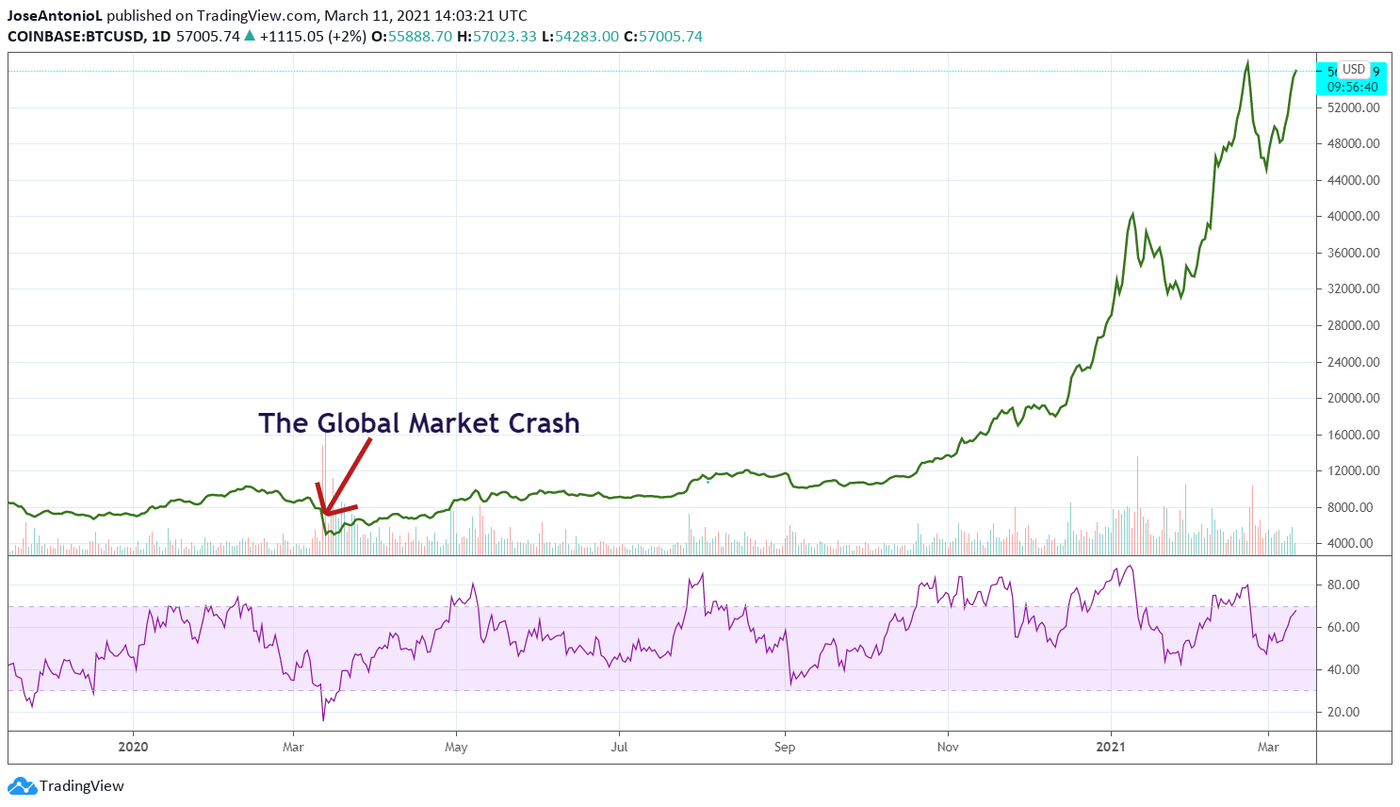 Bitcoin one year after the COVID crash. Image: TradingView

"It's easy to forget that the crash of March 12, 2020, affected all categories—even traditional ‘safe haven’ assets like gold—in a frantic flight to cash that saw Bitcoin being treated the same as any other class," Jason Deane, a crypto market analyst with Quantum Economics to Decrypt.

"However, the permanent change in the macro financial landscape that followed created a new wave of confidence in crypto assets, especially Bitcoin, which went from being a fringe and experimental concept to being a strong contender for a long term store of value," he said.

It only took Bitcoin about a month and a half to regain the losses incurred on Black Thursday—but it didn’t get to where it is today on its own, and may have even received some help from competing assets.

The DeFi craze during the summer of 2020 arguably helped fuel the crypto market’s recovery. Decentralized finance, or DeFi, is short-hand for a collection of bank-like financial products and services that function without the need for a bank-like intermediary. All the action takes place peer to peer, and the vast majority of it happens with Ethereum, the second-largest cryptocurrency by market cap.

When DeFi began catching fire in mid-2020, it caught the attention of investors and risk-lovers alike—and, as the dominant cryptocurrency in the market, Bitcoin provided a gateway to enter this new territory.

As more and more “degens” rushed to get in on DeFi, and the more Bitcoin swapped hands, the price of BTC slowly recovered. 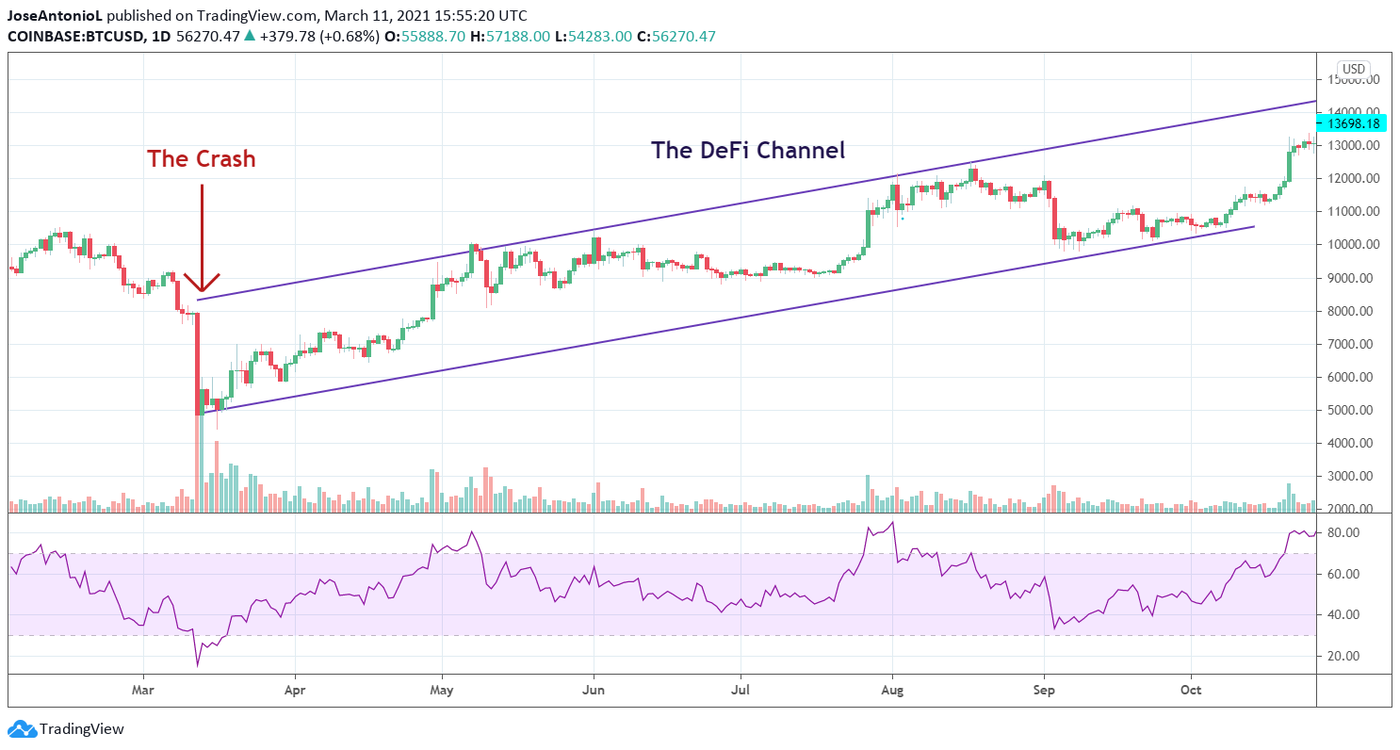 But if DeFi lit the match, then institutional investors added the fuel, starting with cloud software company MicroStrategy.

The publicly traded firm wasn’t probably wholly unfamiliar to most crypto market observers at the start of 2020. But by August, the company had become a household name in cryptoland.

MicroStrategy made its first jump into Bitcoin with a $250 million investment—a modest sum compared to where the company’s CEO, Michael Saylor, would eventually take this ride. Throughout the year, MicroStrategy would go on to make many more splash announcements of big Bitcoin buys. The company now holds more than $5 billion in Bitcoin as part of its reserves.

After MicroStrategy, other companies soon followed—some big, some small. 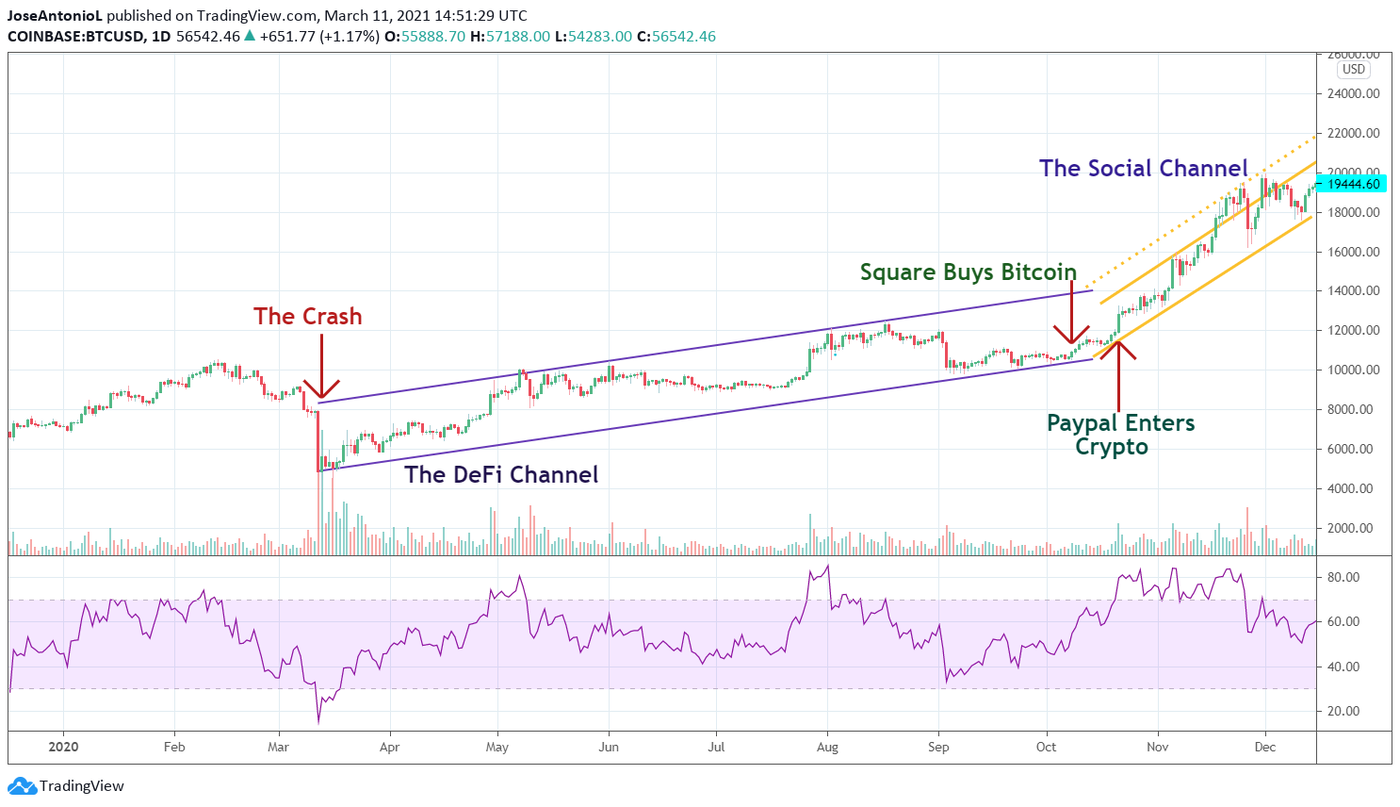 Jack Dorsey’s Square announced a $50 million investment in Bitcoin in October 2020, which preceded a sizable spike in the price of Bitcoin. A few days later, PayPal announced the launch of a service to buy, sell and store cryptocurrencies. That helped push the price up even more.

But it was undoubtedly MicroStrategy’s initial play, along with Saylor newfound Bitcoin evangelism on Crypto Twitter, that led the way for the likes of Musk and others to follow. 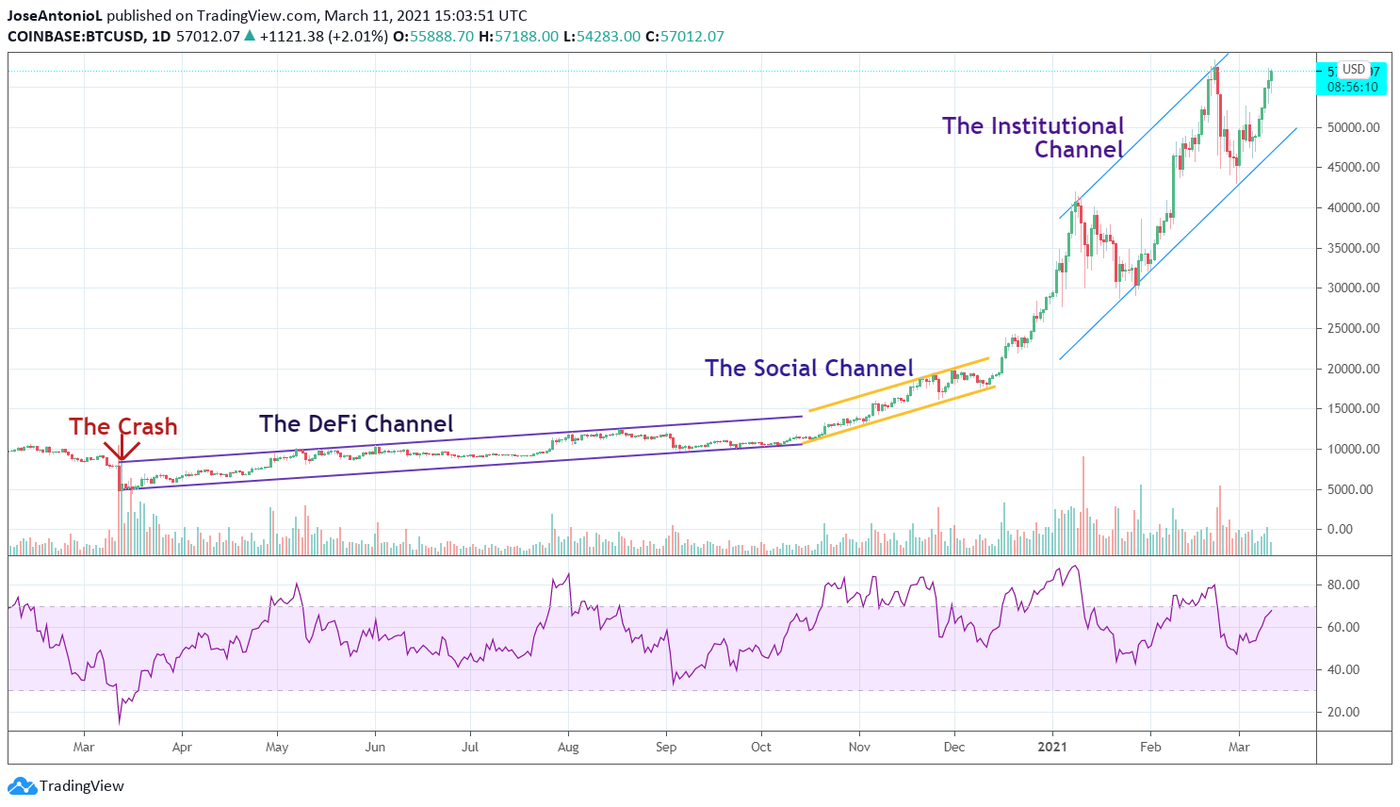 "Once the first public company [MicroStrategy] made a strong financial statement about the durability of Bitcoin, the way was clear for other institutions and global payment systems to follow, further driving confidence, adoption and interest,” said Deane. “As the network effect of Bitcoin has increased, so has the price."

And as a result of these moves, Deane argues, your “typical Bitcoin investor today” is much more aware of the financial reasons to invest in Bitcoin, rather than early buyers who jumped in “purely ideological ones of the past.”

What should Bitcoin hodlers expect?

At the moment, Bitcoin appears poised to continue reaching new heights, according to the analyst, though price drops along the way should not be unexpected. After all, Bitcoin recently suffered its worst dollar-denominated price crash in history just a couple weeks ago.

"We expect the cryptocurrency ecosystem to continue to grow exponentially, pushing boundaries, testing new concepts and creating new services. Some of these will create new challenges and failures, but the upward trajectory of activity is now as inevitable as it is unstoppable," Deane said.

It all sounds like a lot to be happy about if you’re a Bitcoin hodler. Until the next crash, that is.