ActivePure Technology inactivated 99.9% of high concentrated airborne SARS-CoV-2 virus in an enclosed setting in just 3 minutes.  SARS-CoV-2 is the virus that causes COVID-19

Testing of the ActivePure Technology® was conducted by one of the world's top biosafety testing facilities, the University of Texas Medical Branch (UTMB), which primarily tests for the U.S. military and the Centers for Disease Control (CDC).

Because Vollara Air & Surface Pro+ treats interior exposed surfaces as well as indoor air, it doesn’t fit into the category of an air purifier only. The term “environmental conditioning” more accurately describes the overall effect of the active technologies within the living area. 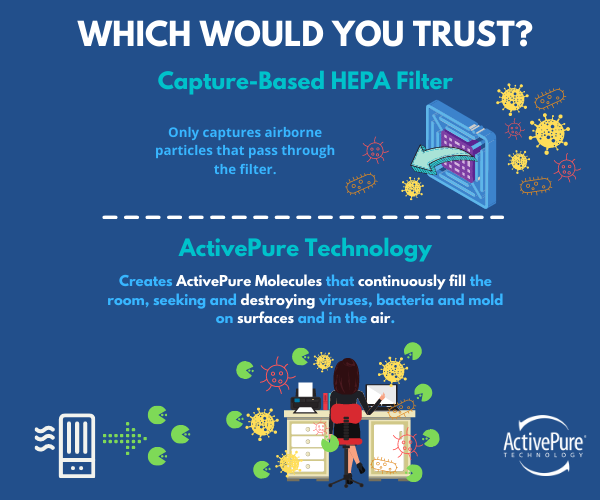 Vollara’s ActivePure Technology has been tested in both university and laboratory environments, and also been used in numerous commercial and industrial settings that face particular high-risk issues. ActivePure Technology is engineered to eliminate contaminants in the air and on surfaces and is currently used in homes, offices, hospitals, daycares, hotels and professional sports facilities.

Vollara’s ActivePure Technology pulls free oxygen and water molecules in the air through ActivePure's patented honeycomb matrix. The technology creates powerful oxidizers, known as ActivePure Molecules, that are then released back into the room, where they seek and destroy DNA and RNA viruses including SARS-CoV-2 (novel coronavirus), Swine Flu (H1N1), Avian Bird Flu (H5N8), Hepatitis A (HAV) and MS2 bacteriophage, regardless of their size, on surfaces and in the air.

Click here for more information and to secure additional safety measures for you, your family, your staff and your customers:

ActivePure Technology provides continuous active surface and air purification through its unique, patented ActivePure Cell. An internal fan draws in air from the room where the unit is located.

Air moves into the unit, where negative ions — created from ion brushes — charge incoming contaminants so that the oppositely charged carbon-coated HEPA filter media can be more easily entrained from the passing air. As air exits the filter, it passes through the ActivePure Cell, which contains two ultraviolet bulbs and a proprietary metal-based photocatalyst. This catalyst, when exposed to the energy from the UV bulbs, creates hydroxyl radicals and super ions, which enter ambient air to oxidize, mineralize and convert organic compounds into nonorganic forms. The released particles, known as ActivePure Molecules, fill the entire air space of the room, rapidly seeking and destroying microscopic pathogens, including RNA viruses, DNA viruses, bacteria, mold and fungi. Whereas, passive technology, also known as capture air purifiers require pathogens to pass through the device.

Click here for more information and to secure additional safety measures for you, your family, your staff and your customers: